Back to basics: Visual Studio tips

[cross posted from my MSDN blog]

To me its not about knowing how to do something. Its knowing that you can do it at all. This will be my list of those things. Some will be short and sweet others will be longer. Some have been in Visual Studio for a decade and some are new. Even if you are an experienced Visual Studio user, at least glance at the titles because you never know what you don’t know. Or you may read one and have a better way to do it. If so, let me know in the comments and we can all learn together.

As I add tips in subsequent posts, I’ll add a link here so it has the whole list in one place.

You can get a full list of the features it adds at its page in the Visual Studio Gallery so I’m not going to go into detail about them here. I’m just going to say – install it. You can thank me later.

You can install it from the page in the Visual Studio Gallery but the easiest way is to just have Visual Studio kick off the process for you. Select “Extensions and Updates” in the Tools menu.

Then make sure you have the “Online” tab selected in the left panel and search for Productivity. When you find it, click the Download button to start the download and run the installer. 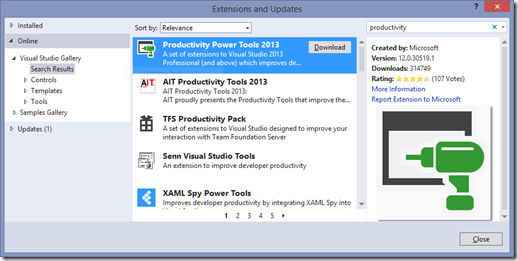 You will probably be asked to restart Visual Studio after the install is completed. From then on, Visual Studio will notify you if there is an update to the tools.

Professional Geek - I work for Microsoft
View all posts by Negative Eddy →
This entry was posted in VSTips. Bookmark the permalink.